Today was a great day of ministry, information, and shopping. In fact, when we walked to the bus this morning, we were accosted by vendors selling bags 5 for $10.  After all the clamoring to make purchases and of course the fact that we have shopped EVERY day Pastor Jerry asked us if we still had “Financial Peace”.  Great reminder Pastor! We started things off by heading to a Jewish village south of Jerusalem that reflected the Jewish struggle in their own land. This kibbutz now turned settlement stands modernly much as Masada does historically as a stand by the Jews for their right to live in their own land. It also stands in opposition and argument to the modern push to get Israel to divide its land and give part of it away.

The living memorial of this kibbutz is a solitary tree that has stood throughout the life if this settlement, including the seeing of many defenders’ deaths as they stood for what they owned and what they believed in. 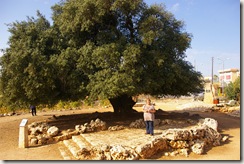 Even more beautiful were the living memorials to the efforts of these men and women; these are their beautiful and playful children. 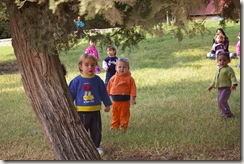 From here, we traveled over into Bethlehem. It was interesting because we entered into Palestinian territory and therefore had to transfer both buses and drivers because the PA will not allow Jews into their territory. (I don’t understand why Palestinians can travel freely back and forth but Jews cannot … in their own land.) One beauty of this, however, was that our Palestinian guide was also a Christian and gave me great insight into the events and emotions of the tumultuous land. 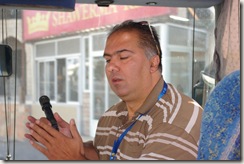 We went into one of the Shepherds’ fields (behind the YMCA) where we spent some time in one of the caves. Abraham, our guide, shared with us the thoughts that the shepherds who received the announcement of the birth of Christ were probably watching the special sheep: the ones being prepared for the Passover sacrifice. This was a great perspective in relation to Christ’s incarnation. 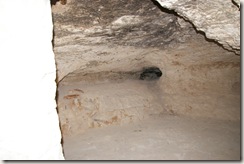 Cheri also taught here regarding the truths of Bethlehem: the fact of its smallness and obscurity (as well as others) and how we could each expect Christ to use us no matter how insignificant we may feel. (I (J) love to hear my wife teach.) 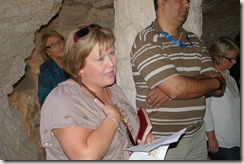 Then we went shopping in a Palestinian Christian store where they specialized in olive carvings. We were able to pick up a small nativity piece which I think is very beautiful. 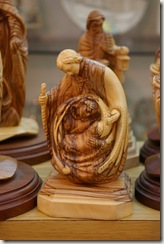 After transferring back to our normal bus, we headed over to a Jerusalem Prayer Center where we were all briefed in the political scene in Jerusalem and where we prayed for a couple of hours for the government, the land, and the people. This was an awesome time where I especially sensed the move of the Spirit in a Chinese pastor. I did not understand a word she said but I could tell she reached Heaven. 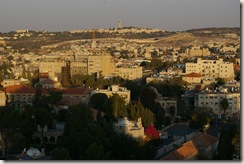 From here, we went over to the Knesset, the Israeli government center where we observed and revered the large menorah. I then led the pray for the peace of Jerusalem as we surrounded that menorah. 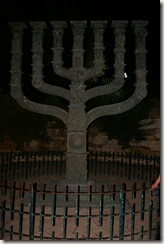 Finally, after a long day, we ate supper and called it a night.  At this point in the trip we are on sensory overload,..,trying to take in sooo much in such a little amount of time.  What I do know is that God is bringing new revelations to our hearts about Israel and the Jewish people that is forever changing us.

Posted by Pastor Jim Garrett at 11:27 AM