The Hem of His Garment

This is a rather lengthy blog, but I think the information contained in here is vital for most Christians in this 21st century. I am going to focus on a practical application of the power that raised Jesus from the dead: His ability to raise us from our infirmities and difficulties. And the way I want to do that is through a story found in Mark 5.

Mk 5:25-34- “A woman who had had a hemorrhage for twelve years, and had endured much at the hands of many physicians, and had spent all that she had and was not helped at all, but rather had grown worse — after hearing about Jesus, she came up in the crowd behind Him and touched His cloak. For she thought, "If I just touch His garments, I will get well." Immediately the flow of her blood was dried up; and she felt in her body that she was healed of her affliction. Immediately Jesus, perceiving in Himself that the power proceeding from Him had gone forth, turned around in the crowd and said, "Who touched My garments?" And His disciples said to Him, "You see the crowd pressing in on You, and You say, 'Who touched Me?'" And He looked around to see the woman who had done this. But the woman fearing and trembling, aware of what had happened to her, came and fell down before Him and told Him the whole truth. And He said to her, "Daughter, your faith has made you well; go in peace and be healed of your affliction." (NASU)

In this passage, we find a description of a woman with an issue of blood. Grammatically, this story is what is called an inclusio. It actually invades and sits in the middle of another story: the story of the daughter of Jairus.

In Jairus’ story, Jairus was an official of the Temple in Jerusalem. And he had a daughter who was 12 years old. (All of this important because there is an issue that is being made … as we will see later.) As Jesus was going to the home of Jairus, He is confronted by large crowd of people. The Bible describes this crowd as “pressing in” on Him. And there, in the midst of the crowd, was this woman with an issue of blood. By Jewish law, this woman should not have been there because she was “unclean.”

She was possibly around 24 years of age because she had dealt with this issue of blood for about 12 years. Implications are that this “issue of blood” was some part of a normal menstrual cycle, though her illness was certainly not NORMAL. Also, notice an interesting concept arising if you accept her age as being 24. For sure, her story fits in the middle of a story of a 12-year-old girl. 12 years of age was the normal age for a young lady to begin her cycle of womanhood. In fact, the differentiation between children and adults in the Bible was recognized between the ages of 12 and 13. Even today, Jews celebrate the Bar/Bat Mitzvah when children cross that bridge between childhood and adulthood. They become, literally, sons/daughters of the covenant.

But, back to our story, this woman came with a distinct purpose of touching Jesus in order to be healed. She knew she was unclean: she had had the issue of blood for 12 years and had spent all that she had (to fix it) and was not helped at all. She also knew she was not supposed to be there in the midst of that crowd: she was unclean.

In other words, this was a woman who knew the Law of the Lord. Some have suggested that this woman was a Gentile, but evidence speaks clearly (in my mind) for the case of her being an understanding, believing, practicing, law-abiding … but desperate … Jew.

Again, it my belief that this is further magnified by the fact that this story occurs in the midst of a story about Jesus going to the home of a man who was an official of the temple in Jerusalem. That, and there is the allusion to the number 12, which IS used as a Biblical connotation to the people of God (the 12 tribes of Israel, the 12 Disciples, the 12 gates in the book of Revelation, etc.)

So here is my theory, not only did this woman know what she was doing, but she also knew what she was going to do in order to procure her healing. 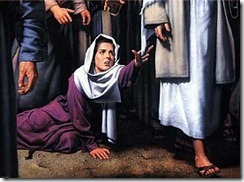 So, let’s look carefully at the Biblical description of the mode of her healing:

Mark 5:43-48- “And a woman who had a hemorrhage for twelve years, and could not be healed by anyone, came up behind Him and touched the fringe (tou kraspedou) of His cloak (tou himatiou), and immediately her hemorrhage stopped. And Jesus said, “Who is the one who touched Me?” And while they were all denying it, Peter said, “Master, the people are crowding and pressing in on You.” But Jesus said, “Someone did touch Me, for I was aware that power had gone out of Me.” When the woman saw that she had not escaped notice, she came trembling and fell down before Him, and declared in the presence of all the people the reason why she had touched Him, and how she had been immediately healed. And He said to her, “Daughter, your faith has made you well; go in peace.”

The Messianic Renewed Covenant (Bible) says, “Luke 8:44- “She came up behind him, and touched the tzit-tzit of His garment; and immediately her flow of blood stood.”

Allow me to take a moment to give a description of the covering Jesus wore. Certainly, He wore some type of garment. This garment probably had fringes and tassels attached to the bottom perimeter … but we’ll get to that shortly. Contrary to pictures that we often see, it is my belief that Jesus’ garment did not include the prayer shawl (tallit) as we know it. The modern prayer

shawl is worn in the synagogue and in the home by Jewish males (and some females) as a covering. To Christians today, it is a reminder of the clothing Jesus wore.

In fact, the Bible does not command wearing of the tallit. Instead, it simply takes the garments that people already were wearing to cover themselves and instructs them to add fringes (tzit-tzit) to the four corners of these. There are some Jews today who wear an undergarment that openly shows these four tassels. This garment is called a tallit katan.

Today, because Jewish people wear Western clothes instead of Eastern clothes, they keep this Biblical law by wearing a four-cornered garment as an undershirt. The little tassels are coming out of the four corners about the beltline, hanging down in front of and beside them. This fulfilled/fulfills the command regarding the tzit-tzit.

Numbers15:37-41- “Then the Lord said to Moses, “Give the following instructions to the people of Israel: Throughout the generations to come you must make tassels for the hems of your clothing and attach them with a blue cord. When you see the tassels, you will remember and obey all the commands of the Lord instead of following your own desires and defiling yourselves, as you are prone to do. The tassels will help you remember that you must obey all my commands and be holy to your God. I am the Lord your God who brought you out of the land of Egypt that I might be your God. I am the Lord your God!”[1]

It is my summary that the tallit, the prayer shawl, then, serves not only as a fulfillment of the Torah, but also serves as a living reminder of God Himself. 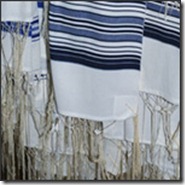 So I want to give you a few details concerning the tallit; hopefully that will explain my summary … and hopefully, it will bring a renewed sense of healing, deliverance, and hope to you.

There are 613 tassels on every prayer shawl. By the way, do you know how many laws the Rabbis tell us there are in the Bible? 613. These tassels are, in fact, reminders of the 613 laws of God. In other words, when the people of Israel see these, they are reminded of their responsibility to obey the Law, and of their calling to be a holy people unto the Lord.

Additionally, there are also four tzit-tzits (large tassels) on the tallit: one on each corner. These represent the four-letter name of God, יְהוָ֥ה (usually understood as Yahweh.) This is often called the tetragrammaton, a word of Greek derivative meaning “word with four letters.” Also, the Hebrew word for “name” is “shem”. It literally means, “name, reputation, reknown.” In other words, one’s name also declared his/her reputation. To speak one’s name was to state one’s reputation. So, to see a visible statement (such as the tzit-tzit) was to be reminded of the name … and therefore, the reputation of the Lord.

Again, besides reminding the wearer of the name of God, the tzit-tzit, too, are fulfillments of the law of the Lord. The Torah commands us to wear tzit-tzit (fringes) at the corners of our garments. “You shall make for yourselves twisted threads on the four corners of your garment with which you cover yourself.” Deuteronomy 22:12

Some ancient Jewish traditions hold that the threads of the tassels were white to symbolize righteousness … but there was also a conspicuous blue thread among the tassels to symbolize the heavenly origin of the commandments. And Jews would wrap these tzit-tzit around their fingers to remind them of the power of God. (This is probably where we get the idea of tying a string around our finger as a reminder … so as not to forget things.) In addition, in some Jewish traditions, there are 39 windings in each of the tzit-tzit. This equals the numerical value of the Hebrew words "the Lord is One."

Now, let me bring the story to full-circle: When the woman with the issue of blood touched the fringes of Jesus’ garment, the tzit-tzit, she touched His personal outward, physical symbol and reminder of God’s righteousness and power. Because she believed this manifestation on her part of touching the tassel on the hem of His garment would heal her, it did. This was an outward act of an inner faith.

Be reminded … Be an Overcomer … in HIM.