I am awake at 5 AM (Honolulu time) and read a little and then decide to go out and walk along the beach for a bit. Of course, I have my Pentax in hand. There are already people out surfing and doing this unusual (to me) thing where they stand in a broad boat and then paddle it. It is very interesting to watch as is the surfing.

I am very interested in the birds around here. There are many pigeons and most of them are white as a base color. I am not here to “bird watch” but I did snap a few pics of these beautiful birds.

Also, Diamond Head volcano is so beautiful from here and I have been able to get quite a few pics of it although this AM it is a little misty/rainy. You know, that may actually work for me photographic good though.

We went to a beachside service today but also enjoyed a service from our church back in Chicago via streaming video. The beachside service featured a mix of worship and hula. The worship leader wore long hair, shorts, and barefeet. The pastor was neatly dressed (and barefoot.) It was a good message but the music was WAY laid back. (You can probably tell that I am writing much of this throughout the day as we experience some of the things; that’s just my way of trying to remain fresh with what we experience.)

I also spent a little time of relaxation this AM reading about Egyptian King Tutankhamen. Although my read in fiction, it is based upon historical data. It is very relaxing.

For lunch, we went down to the Tropics Bar and Grille where Cheri had a pulled pork sandwich and I had a salad with Ahi Tuna and a bowl of unique tomato soup. (I don’t think I’ve ever seen a $5 glass of tea before.)

The day at the poolside was really nice as Cheri and I sat out there for about 1 1/2 to 2 hours. I was mostly people watching today but I was totally fascinated at this gentleman who was learning to “stand up Paddle”. He was clearly doing this for the first time but he had a tenacity that I absolutely loved. He would not accept defeat; instead, he would fall off and get right back up again. I was impressed. When he made it around the lagoon the first time, I wanted to stand up and cheer for him.

Tonight is the luau and we are excited about it. In fact, this was a highlight (OK we’ve only been here two days and one of those was locked up awaiting the tsunami.) But it was good. The food was good, especially the ahi tuna sashimi. (And I hope that pina colada was virgin … it tasted so but I DID NOT see it get mixed up.)

The show was incredible with beautiful women and extremely handsome (and built) men. (I used to be built like that … but then I woke up and realized reality.) They twirled fire, shook hips and just did an incredible job in their particular arts. I was well please.

Also, we three different leis today … one of orchids, one of some kind of nuts, and one of sea shells.

I think it was an incredible day.
Posted by Pastor Jim Garrett at 11:50 PM No comments: 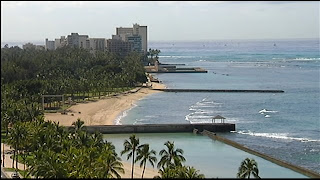 What an exciting day. We arrived in Honolulu around midnight, got to the room and I am sure it was at least 2 AM before we got settled in bed … no problem because we had decided to sleep in late to help from having jetlag. Fat chance. Instead, the alarm went off at 6 AM … but I didn’t set an alarm clock, and it would NOT shut off. What is this all about. Then, I get a message from my daughter Amber saying, are ya’ll getting the Tsunami warnings yet? What Tsunami warnings. I turn on TV and the internet and find out that Chile has just suffered an 8,8 earthquake and that Tsunami warnings are out all over the Pacific Rim … including Honolulu. Then we start getting announcements that the Tsunami WILL hit Oahu around 11:37 AM and that we are to stay put above the 3rd floor of our complex. (We are on the 21st floor.)

All the roads were soon deserted as people fled to higher ground. Our complex sits overlooking a marina and many of the boats left to head at least two miles out. (Apparently they were safe out that far.) By 11:00 AM, even safety personnel were evacuated. … and warnings were sounding off on the hour. (Oh yeah, the siren is directly below our hotel in plain view … boy was it loud.)

We prayed, communicated briefly via cell phone, texting, and face book. We didn’t do too much because the alert systems were telling everyone to be brief so that communications channels/bandwidth would be open for safety reasons.

Because we had just gotten in, we had nothing … except a bottle of water, and bag of candy, and a bag of popcorn we had brought with us.

So this is what we looked like: Cheri and I are sitting out on the deck with our water, candy, popcorn, 2 cameras, video camera, binoculars, and ipod/radio. The roads are silent. We have drawn water in every available container in the apartment including the tub, and both sinks. We did not know if we would have electricity or running water so we wanted to be prepared.

We contacted close family and close church family and let them know we were OK and that God was with us.

Friends were constantly checking in via texts.

We never did receive the big stuff that was headed our way. We did see a really strange phenomenon where the water would go out (like low tide) and then surge back in but there was never any danger shown to us.

I did know if God diverted it according to our requests or what.

I do know that God was with us and Cheri and I were prepared to help anyone we could however we cold when this thing hit.

Somehow, that never had to happen.

So we did what Jesus would do in a good storm … we slept.

Only to wake up to 4 (count the … FOUR) more warnings followed by announcements to the effect of “This is a false alarm … you do not have to leave the area.” Yeah, thanks a lot for those.

Anyway, we have made another memory. I’m sorry my mom had to worry about us through all of this … but I am told that’s what moms do.