The Twelfth Imam by Joel C. Rosenberg- A Review

This review WILL give one important but (I feel) necessary spoiler.

I have loved all of Rosenberg’s fact-fictional writings. Some have called him prophetic in his writings because seemingly, he has been able to predict events before they happened … including the massacre of 9/11 and the capture of Saddam Hussein. Yes, both of these events (and more) were actually written about in his fictional writings.

And he IS an exciting Christian writer with a gripping story.

But all of his previous fictional works were clearly, up front, “to-be-continued.”

Not so with the Twelfth Imam. (and thus, the spoiler.)

In the book, we are again taken to the world of the Middle East where we are presented with several believable characters. And Rosenberg takes the time to develop them all well.

He even ventures into a bit of a taboo field (for Christians) that has a critical tie-in toward the end of this story.

He presents a great understanding of various aspects of Islam AND he presents some of the tensions the world and Islam are throwing at one another.

Again, I was SUPER engaged in the Twelfth Imam.

But my recommendation to ALL readers is: wait until the “follow up” book comes out because you will get so wrapped up in this one … and then come to an abrupt NON-ending.

I wanted so much more and I wanted it NOW.

But, we will wait patiently for the next episode.

Posted by Pastor Jim Garrett at 5:16 PM No comments:

Courageous: The Movie- A Review

Cheri and I just walked in the door from seeing the Pastors’ preview of Courageous: The Movie. It is coming out in theaters on September 30.

May I simply say that it is a MUST SEE movie … especially for all dads. It is serious. It is funny. It is challenging. It is liberating. It is all of those things and more.

While I cannot give you a spoiler, I can say that this movie is for dads what Fireproof is for marriages.

My favorite character is Javier and I have now adopted his title for my Marroquin son: The Snake King. See it; you’ll see what I mean.

Here is an advance trailer and tickets are coming out beginning Father’s Day.

Posted by Pastor Jim Garrett at 8:38 PM No comments:

Highlight of Our Disney Vacation

I am really sorry that I haven’t shared this with all of you already since it is probably THE HIGHLIGHT of our Disney Vacation. The night that Jim took Jamie & Crystal to Downtown Disney I brought their kids back to the room after swimming and got them ready for bed. Chloe was out like a light. I was trying unsuccessfully to find a kids’ program for Christian and Carson to watch as they drifted off to sleep. We were talking about the day and all the fun we had … that was the day the boys went on the Pirate Adventure. And I don’t really remember how the conversation turned to Jesus wanting to be our best friend but Christian started asking me questions about it … like, how can He live in our hearts (Carson thought that sounded gross) and what did it mean for Jesus to be our best friend, would he do stuff with us … did it mean He would come play with him? And I shared with Christian that when Jesus comes to be our best friend that He will be with us all the time and He will help us make good choices and love people and treat them good and be kind and loving and He will help us do great things. Christian was really interested and I saw that open door of his heart so I asked him if he would like to pray and ask Jesus to be his best friend and he said yes … so I led him in a prayer and He asked Jesus to forgive him and to be his very best friend and help him live his life for Him.

Carson had some interest but not quite ready at his age … he thought it was gross the Jesus would come and live in our hearts and he already has a best friend at school. I told him that Jesus would be his very best friend when he is ready. 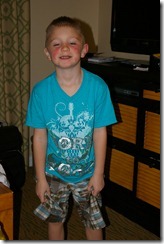 Posted by Pastor Jim Garrett at 5:53 PM No comments:

I think for once, I’ve finally gotten it right. Mind you, not everything is always a “do-over.” Nor is much sad or difficult in my life. But I have had a journey of reading that was often met with books that I just could not connect with until I had approached them a third or fourth time.

But I have finally gotten it right (or at least something in that “reading” genre has finally taken ahold of me.)

I just finished reading Soul Print by Pastor Mark Batterson. Keep in mind that I have three other books by Batterson and that I fell absolutely in love with his, In a Pit with a Lion of a Snowy Day. So Soul Print was high on my list of desire-to-reads. And it DID NOT FAIL. In this book, Batterson addresses your uniqueness, as well as God’s unique plan for you. Pastor Mark also encourages and teaches each Christian in the paths of integrity and spirituality.

I think that Batterson brings a fresh breath to the Christian world in the facts that he is relevant and yet, with sufficient Biblical depth. I find his writing engaging as well as thought (and LIFE) provoking and I am always encouraged yet challenged when I read his works. (Plus, it didn’t hurt any that Soul Print drew much of its attention from the stories concerning King David, who happens to be one of the Bible’s most interesting individuals.

I strongly recommend Soul Print and I look forward to using it in my personal life as well in my teachings. I rate it 5 out of 5. I find no fault with it other than I prefer briefer chapters … but with the divisions within each chapter, that was over-lookable.

I received this book for free from WaterBrook Multnomah Publishing Group for this review.

Posted by Pastor Jim Garrett at 10:41 AM No comments: