Israel Journey- Getting Back in the Groove.

Between the Words ... Pastor Jim’s Perspectives on the Weekend Behind and the Week Yet to Come (December 4, 2019)

Israel Journey- Getting Back in the Groove.

Wow!
I guess I'm really getting older.
I have NEVER faced such difficulty in re-acclimating to my US time and routine. The flight to and from Israel, by way of Istanbul, has taken its toll.
I have worked really hard to establish a routine of blogging every Monday BUT, that went all out the door on this trip -- and a fabulous trip it was -- but I am exhausted.
31 of us made this journey. Everyone expected something different -- yet each expected the same thing: we wanted to walk where Jesus walked. We wanted to see the sights where events of the Bible really happened. (and yet, some want to see archaeology. Some wanted to float in the Dead Sea. Some wanted to taste the fabulous foods of the Middle East -- and some -- wanted to shop.)
Regardless, we all came away fulfilled.
But as a way of helping me to segue back into daily reality, I want to post a devotion that my wife and I had written for our visit to Bethlehem. Let it speak to you as you read.


The building of the Church of the Nativity is the oldest standing church in the Holy Land.  Underneath its present floor are beautiful mosaics of the earlier church. (I actually saw some beautiful mosaics on previous trips to Israel that had been excavated … they were amazing!) According to tradition, Mary gave birth to Jesus at the place where the star is located on the floor of the Church of the Nativity. The tradition that the birth was in a cave is one of the oldest Christian traditions. It has been stated that the cave of Jesus’ birth was pointed out in His day and no doubt is the same place where this church was erected.
To the east of the city is believed to be the area of the fields of the shepherds “keeping watch over their flocks by night”. Several churches have also been built there to commemorate this event. Even today local shepherds can be seen tending their flock in this same area. As a matter of fact, on my last visit to the Holy Land, we met some of these shepherds who have made it a business to charge to have pictures made of them and the sheep in that field. (We were told by one vendor, "We love Americans -- and the more you spend, the more we love you.")
But the scene to the Shepherds at the birth of Jesus, happened in this manner:
Luke 2:8-20 – That night there were shepherds staying in the fields nearby, guarding their flocks of sheep. Suddenly, an angel of the Lord appeared among them, and the radiance of the Lord’s glory surrounded them. They were terrified, but the angel reassured them. “Don’t be afraid!” he said. “I bring you good news that will bring great joy to all people. The Savior – yes, the Messiah, the Lord – has been born today in Bethlehem, the city of David! And you will recognize him by this sign: “You will find a baby wrapped snugly in strips of cloth, lying in a manger.” Suddenly, the angel was joined by a vast host of others – the armies of heaven – praising God and saying,
“Glory to God in the highest heaven, and peace on earth to those with whom God is pleased.”  When the angels had returned to heaven, the shepherds said to each other, “Let’s go to Bethlehem!  Let’s see this thing that has happened, which the Lord has told us about.” They hurried to the village and found Mary and Joseph. And there was the baby, lying in the manger. After seeing him, the shepherds told everyone what had happened and what the angel had said to them about this child. All who heard the shepherds’ story were astonished, but Mary kept all these things in her heart and thought about them often. The shepherds went back to their flocks, glorifying and praising God for all they had heard and seen. It was just as the angel had told them.

So, what can we take home with us from Bethlehem? A few things cross my mind…
·       Bethlehem was chosen by God to host the birth of the King. God has chosen us, He picked us out as His very own to host King Jesus in our own hearts.
Ephesians 1:4 – Even as (in His love) He chose us (actually picked us out for Himself as His own) in Christ before the foundation of the world, that we should be holy (consecrated and set apart for Him) and blameless in His sight, even above reproach, before Him in love.
·       Bethlehem was a “little” town yet Jesus, God in the flesh, came to dwell in it. God is not looking for “big” people who have it all together, who look a certain way or who talk a certain way … that have money, status, gifting, or personality. He is looking for ordinary people such as you and me. He wants to come and dwell in us, to take up residence in “little ‘ole’ us”.
Micah 5:2-- But you, O Bethlehem Ephrathah, are only a small village among all the people of Judah. Yet a ruler of Israel will come from you, one whose origins are from the distant past.
I Corinthians 3:16-- Do you not discern and understand that you are God’s temple (His sanctuary), and that God’s Spirit has His permanent dwelling in you (to be a home in you, collectively as a church and also individually)?
·          Throughout the Christmas story we see “be not afraid”. The angel told Mary to not be afraid … the angel told Joseph not to be afraid and the angels told the shepherds not to be afraid. God is saying that to us TODAY. Don’t be afraid to step out into your calling and your destiny and your purpose! He is with us in everything and through everything. Be Strong! Be brave! Don’t be afraid. Your God is with us everywhere we go! Glory to God in the highest!
Joshua 1:9- “Remember that I commanded you to be strong and brave, Don’t be afraid, because the Lord your God will be with you everywhere you go.”
·          Many of us tend to want to idolize places like Bethlehem and events and moves of God.  He simply wants us to” idolize” Him: to love Him with all our hearts, souls, minds, and strength. That is the GREATEST commandment. And when we do that His presence shines through us to others to see Him and be drawn to Him.
Deuteronomy 6:5 Love GOD, your God, with your whole heart: love him with all that’s in you, love him with all you’ve got!

God has chosen you and me to host Jesus. Many times, we feel too ”little”, too ordinary, and not good enough. But God sees us SO differently than we see ourselves and He wants to come to dwell in us: He desires to take up residence in us. All he really wants from us is for us to love Him with everything we are and everything we have!
O Little Town of Bethlehem … ”little ole you”, I choose you to be great, to host Jesus. Let Him in and love Him with your whole heart! Be strong and brave! Do not be afraid! I am with you everywhere you go!
Cheri Garrett
Posted by Pastor Jim Garrett at 7:45 PM No comments:

ISRAEL- THE DAY BEFORE

Israel- The Day Before 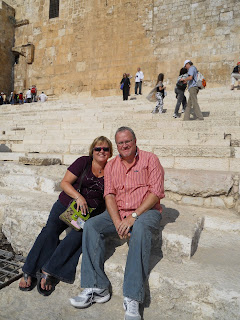 Tonight, we will call all the kids and will speak with most of the grandkids too.

And we are ready to head out tomorrow AM for Israel.

We leave Columbus, OH, head to O'Hare in Chicago, to Istanbul, Turkey, and then to Tel Aviv, Israel.


We hope to blog daily about this trip … and to share a few pictures. I will post the blog on my personal site and on the OCF site for those who are interested.

If you know us and you know people who know us, pass this link along to them so that they too, can know what’s going on and so they can pray for us too.

Tuesday is a day of travel, so you probably won’t see too much from us then though.

Keep the entire trip and team of 31 in prayers.

Jim & Cheri
Posted by Pastor Jim Garrett at 11:50 AM No comments: