Bumps in the Night 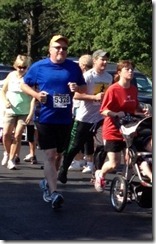 Well, it finally happened: I was out exercising my new found lifestyle and hobby, running. It was a hot day so I waited until night-time to begin my run … after 11 PM to be semi-exact. Now mind you, running on the sidewalk is tough, especially for someone who, in his 53 years of life, has NEVER run a complete mile until now. And this part of the sidewalk is dark. There are street lights but they are shielded by the overgrowth of trees.
So you stay alert … because it’s dark, and because it’s late, and because … well, it’s just a smart practice.
I have a long row of tall, evergreen hedges to my left and Willow Avenue to my right … and I’m running … well, sort of …it’s still plodding along at this point, but I am making forward progression in a slow, 235 lbs., almost-54-year-old male sort of way.
And I hear sounds rustling in the hedges. They’re right beside me, and behind me, and in front of me. I am about to get attacked by an angst-filled mob of teens … or a pack of vicious dogs or coyotes … or maybe even something worse.
My ears perk up. My eyes are searching. My body goes into high alert as the blood pressure rises and the breath rate increases. Even the fine hairs on my legs, arms, and back are standing at attention.
Then suddenly …wham … I am hit from the left side … again and again and again. It starts about knee level but the sensations quickly arise to my thighs, my hips, and my mid-section. I am startled and frightened, but I am alive … for the moment.
Then it hits me … all of this commotion is simply the water sprinkler system coming on. The sounds are initially air flowing through the pipes and then … water: cold, wet water.
Did I mention wet?
Did I mention cold?
Then realization of the hilarity of all of this strikes me. This is the kind of scene that my three grown children would hold over my head for many years to come if they found out … and thank God, no one saw it or was around to take pictures … or even worse, to videotape this whole episode and post it on YouTube and FaceBook.
I felt foolishness, relief, and humor all at the same time.
I was safe. I was delivered. I was free.
And as I later surveyed the situation, I realized that a spiritual parallel had just been reenacted in my life. In fact, all of this reminds me of a reality that is presented in the Scriptures.


Isaiah 14:16-19 (HCSB)
16 Those who see you will stare at you; they will look closely at you: “Is this the man who caused the earth to tremble, who shook the kingdoms,
17 who turned the world into a wilderness, who destroyed its cities and would not release the prisoners to return home?”
18 All the kings of the nations lie in splendor, each in his own tomb.
19 But you are thrown out without a grave, like a worthless branch, covered by those slain with the sword and dumped into a rocky pit like a trampled corpse.

These verses immediately follow the famous passage that describes the scenario when Lucifer was cast out of the heavenlies, so this, too, is in reference to Lucifer, the fallen one, the enemy, the deceiver, satan, the devil.
Today, many have cowered in fear because of the accusations and attacks of the enemy. And many others have dreamed up in their minds a concept that he is capable of and responsible for so many things that he, in fact, is not. Isaiah is reminding us that we will look upon him, and sneeringly say, “Is this the man who caused the earth to tremble, who shook the kingdoms, who turned the world into a wilderness, who destroyed its cities and would not release the prisoners to return home?” (Note the tone of sarcasm in Isaiah’s statement.)
Isn’t it amazing how much fear we waste on those things that are unknown … and how much stress is wasted on those things that we hear, those people that we suspect, and those events that we wrongly anticipate?
Just as I “survived” the attack of the murderous water sprinkler system, so too we will overcome our seemingly deepest situations, if only we will keep our focus on Him and allow Him to bring us through these situations. And if we can keep these things in mind, He can even cause us to overcome our fears and our anxieties.
Think about it … and get up and run through your situations and fears.
Posted by Pastor Jim Garrett at 7:23 PM No comments: